Give me the minimum!
I am a minimalistic kind of guy. I cannot justify my desktop environment taking up 250 to 600 MB at startup! I really appreciate the work of the Mate, Cinnamon, KDE and LXQt teams, but all of those environments are just a touch too resource-heavy for my tastes. I don't have a slow computer, nor do I have a small amount of RAM, I just think the desktop environment should look decent and get out of the way so I can do my work (and Fluxbox ROCKS with the window rules you can make!).

A wonderful blessing!
The big news is we've finally moved into our own house! For a long time, both my wife and I were renting. When my wife and I met, I was renting a very bad apartment in Bakersfield, and she was renting a very small house. When we moved to Oregon, we again rented a downstairs apartment in one of the largest complexes in Roseburg...which wasn't always fun. Almost two years went by, but God blessed us with our own home! No one living above us to stomp us awake (that would scare the baby awake and cause untold stress), no folks standing outside our window smoking us out, no icky chihuahua urinating all over our stuff (and car tires). Instead, we've been blessed with a place with a spacious crouch-space basement for storage, a moderate 1-car garage, a nice yard for the wee one to play in (no outside space at all at the apartment) and a really cool quasi-retro-50's type interior! YES!!!

Another nice thing is we are no longer living in a large city. Of course, 'large' is relative. When I lived in South Central L.A. a long time ago, there were millions of people living in Los Angeles. That's pretty large! But I've gradually been downsizing through the years. Bakersfield had around 300,000 before we relocated, and the first place we moved to in Oregon was a city of around 22,000 people and is one of the larger cities for miles around. Now we live in a very small town although not as small as my parents' town, Riddle, which is around 1,000 souls. I think there's about 3,500 people in our town, and that's just fine by me.

You still have the random teen/young-adult cruising through in his lowered Honda with the silly big ring hanging out from below the back bumper, huge and noisy exhaust pipe and 200 dB of bass pumping out, but it's not nearly as bad as L.A., Bakersfield or even Roseburg. We step out front of our house, and it's like we've been transported to a camp site in the moutains. We see deer and wild turkeys walking down our street. I can look outside our back door and see some really wonderful nearby hills/mountains. It's just a wonderfully peaceful and beautiful blessing from our Heavenly Father! Thank you Jesus!

Still autistic...the aspirin didn't fix it
Not much has happened on the autism front. I am on the autism spectrum. Nothing new to report.

Two-year-old teenager
Being a father is so rewarding, but sometimes there are those frustrating moments. My son is so smart for his age that he already has the 'teenage syndrome'...you know...where they think they know everything and the parents know nothing! :-P C'est la vie. God is good, and I regularly ask him for guidance.

Good-to-the-riddance, y'all!
I finally got away from using GoDaddy (which was annoying the crud out of me). I am now trying a different nameservice provider and hopefully things will be smooth sailing.

And today's operating system is...
Operating-system-wise, I've pretty much moved from a long stint on Slackware to Ubuntu 14.04 LTS (server edition). I do not need all the nonsense that comes with the standard Ubuntu desktop install, and since I'm just running Flux + bbbutton + Gtk Menu, I don't need all the Unity or Gnome garbage installed. 14.04 LTS has been really good on my system, and while it's just slightly less responsive compared to Slackware, the convenience of having tons of packages in the repository makes it worthwhile. I did not want systemd or Upstart running on my system, but guess that's the price you pay for convenience, eh? 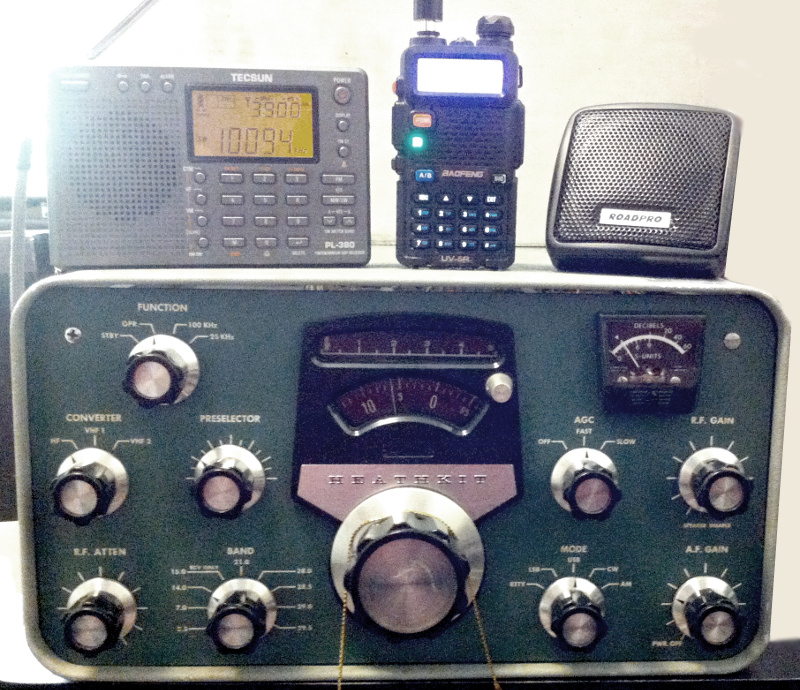 The Heathkit SB-303 Receiver I was blessed with - vintage early 1970's, along with my cheapo Tecsun (non-BFO-equipped) shortwave receiver and my trusty Baofeng UV-5R dual-band handi-talkie

I'm not a spoiled brat, but sometimes my parents like to bless me with things. For my birthday earlier this year, they bought a well-worn Heathkit SB-303 receiver. It was not working when they presented it to me, however they knew I'd probably get it up and running. That I did, although I don't have use of two bands due to a broken hetrodyne coil, and I don't have directions on how to align the various sections (although I've done my best).

The SB-303 works fairly well, and I've finally been able to start copying CW (morse code) and SSB voice. I'm now working on homebrewing a small crystal-controlled oscillator so I can try out QRP (low-power) communications, although I really need some test equipment to make it right.

Peace and hair-grease!
Well, that's it for now. I pray that every visitor to my blog comes to have a CLOSE and PERSONAL relationship with Jesus! Not some religious stuff, but a real relationship! And those who know him already? I pray that you press in even closer. In Jesus' name, amen.