Happy Birthday to my oldest son and daughter!

Earlier this month, I wrote about my time using a 2006 white iMac running OS X 10.6.8. As a long-time Linux and FreeBSD user, it took a little while to get used to using the Mac interface again, but my time as a Mac user in the past helped me get up to speed quickly. I used that old iMac right up until I finally was able to purchase a used 2012 dual-core Mac Mini with a 5,400 RPM hard disk drive and 16 GB of RAM. 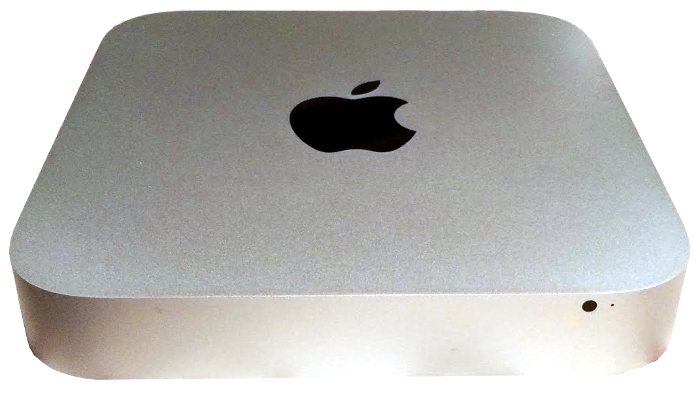 Here is a picture of the Mac Mini

So, how is it running the latest macOS on a new(ish) machine? Well... The four-core i7 processor model was beyond my budget, so I had to settle for the two-core 2.5 GHz i5 model. Overall, this model is acceptable in terms of processor speed, but the 5,400 RPM hard disk drive makes this computer feel slow at times. Boot up time is measured in minutes, not seconds, and larger apps and slow hard disk access time often cause the 'spinning beachball of doom' to rear its head much more frequently.

But that hard disk though...
There are times when this 2012 Mini seems slower than the 2006 iMac it replaces, which is sad. I think the biggest issue is the 5,400 RPM hard disk. I have already ordered a Western Digital Blue 500 GB solid-state drive that I will promptly install when it arrives. (I will update this post with any perceived changes in performance.) This Mini isn't terribly slow, however the slowly spinning hard disk drive really makes this more modern machine seem like some Celeron-toting bargain system from 2002. I know there were 2.5 inch 7,200 RPM and hybrid drives in 2012, so Apple did not do themselves (or customers) any favors by making the 5,400 RPM hard drive the base choice.

macOS 10.13.4 (High Sierra)
As I lamented in my previous article, the 2006 iMac could not run anything newer than OS X Lion, but it still had 10.6.8 'Snow Leopard' installed. I couldn't find a legit free copy of Lion to upgrade to, and most reviews commented that Lion wasn't much better than Snow Leopard on those types of computers. This Mac Mini, thankfully, can run the latest macOS. I say 'thankfully' only because I don't have to see 'Your version of OS X is too old' anymore, but I do miss the some of the simplicity of OS X 10.6.8.

macOS High Sierra works well on this Mac Mini, although it might be a bit heavier than 10.6.8 was. The 2006 iMac booted up, usually, in under thirty seconds while this Mac Mini boots after a minute or so. We'll see how the solid-state drive affects this. Overall, I like the look and feel of macOS 10.13.4 compared to older versions, mostly because the dated Aqua-ness style is gone. Aqua was hot stuff when it first hit the scene, but it seems like everyone on the planet would style just about everything from logos to UI elements after the Aqua look and it got old pretty fast. High Sierra's font and color choices, for the most part, look good and gives this newest macOS a user-friendly + professional feel.

The Finder has some welcomed changes in 10.13.4 compared to 10.6.8. First was my biggest pet-peeve back in the day...folders couldn't be sorted before regular files. There might have been some plug-ins or extension that would fix that, but I don't like adding third-party stuff to my OS unless I absolutely have to. I'm grateful that it's an easy check-box click away in High Sierra. Something else I enjoy about Finder in 10.13.4 is that you can have tabs in the Finder window! PCManFM, Caja, Dolphin and other file managers on Linux and FreeBSD have had this feature for a long while, and it's nice to have it on macOS. One thing I do not like in Finder is that it doesn't focus the folder you came from when navigating back from a child folder, so you don't know where you previously were.

Xcode 9.x
I'm not a super-strong macOS developer just yet, but I know enough to offer some opinions. The last version of Xcode I used on OS X was Xcode 3.x. It seemed to be solid and worked well, but Interface Builder was a separate app and working back and forth between it and Xcode was sometimes un-fun. Newer Xcode versions now have Interface Builder built-in, and there are now such things called 'Story boards'. I haven't used Story boards much yet, but having the interface builder within Xcode itself sure helps with workflow. I'm still only an Objective-C developer on the Mac, so I don't have much to say about Swift yet, but I will say that Objective-C will probably be my go-to language on the Mac for a while due to Swift changing so much. When Swift settles down and is more stable, then I'll try building stuff with it. Xcode 9.3 is fine, although it has crashed a few times on me due to silly things like moving a folder in the Project explorer and other seemingly innocent actions.

Form factor
The 2012 Mini form factor is pretty good. It doesn't look like a trash can and it fits reasonably well on my desk. I had a largish black PC tower in the spot the Mini now occupies, and not having a large dark object looming next to me is a nice change. When using the Mini for typical things such as browsing the web, doing e-mail and writing web-pages in Geany the exterior feels cool or room-temperature. When compiling software, watching video or playing Minecraft, the Mini starts to warm up, and when hosting a Minecraft world to my son, the Mini got so warm that the internal fan was blasting away. I'm thinking that Java and/or Java apps aren't optimized well for macOS because I can run a Linux virtual machine in VirtualBox and play Minecraft with my son and the Mini is only slightly warm to the touch. Fix Java on macOS, Oracle! ;-)

Expandability
Since the Mini is only slightly thicker than the average hard-back book and is about 7 inches wide and deep, there's not a whole bunch of room to tinker. Thankfully, the 2012 Mini allows you to change or upgrade the RAM, unlike the 2014 Mac Minis. The 2012 Mini's processor is soldered in, though, but that's okay. Accessing the disk drive(s) is not super-convenient, but not impossible. I have gone over the 2012 Mac Mini hard-disk replacement guide at ifixit.com a few times and also watched some videos on the subject, and it seems uncomplicated enough for a silly guy like me to perform. We shall see!

Expectation vs Reality
Because my 2006 white iMac performed much better than I expected, I thought that maybe this 2012 Mini would pleasantly surprise me, as well. No, not really. I don't regret my purchase of this Mac, but I'm not super-thrilled by its performance either. Again, this might change when I receive and install the WD Blue SSD, but for now, while perfectly usable, this Mini is just not as quick and snappy as I'd like it to be.

If you were a Mac user in the past and would like to get back into the macOS world, the Mini certainly is a decent choice. Just make sure you adjust your expectations accordingly, though. The Mini is no Pro, that's for sure, but it beats trying to get macOS to run (hassle-free) on a Hackintosh or in a virtual machine. If you do a lot of photo, audio and video editing, you probably will want to go with either the quad-core i7 Mini or an iMac Pro. If you do 'normal' tasks like web browsing, watching Netflix, sometimes compiling software or using Xcode, then the dual-core 2.5 GHz or similar Mini should work, as long as you have a solid-state drive, that is.

[Update] What a difference an SSD makes!
Last night I pulled the slow 5,400 RPM hard disk from the Mini and installed a Western Digital 500 GB SSD. Wow, really, it's a very big difference!

Here are some times to compare:

Just as shown above, every other app also takes much less time to launch, and functions much quicker when using the disk. So, if you buy a 2012 Mini make sure you put an SSD into it, or buy one with the SSD already installed... it will be worth the while!